Threshold to a tranquil haven at the trendy Terrace Studio

Fancy a stay with views of the iconic Vegas vista? Then the signature studio room accented with bespoke furnishings and luxurious amenities is just right for you. The lively Las Vegas landscape or the spellbinding skyline views filter through the sliding glass doors of this dainty 620 square feet spacious stay studio.

An appliance-packed newfangled kitchenette meticulously meeting all standards of modern living is equipped with a microwave and a sub-zero minibar stocked with incredible items. In addition there are  amazing amenities and enriched services for your indulgence, atypical to Las Vegas’ luxury.

Simply unwind at the plush private terrace and enjoy the twilight as the colorful hues cast a hazy glow over the sin city beginning to be illuminated by numerous neon signs.

A satisfying stay at the Terrace studio of the Cosmopolitan Las Vegas is a seamless fusion of aesthetics, functionality and technology. For more fun and thrill info at the Terrace Studio click here. 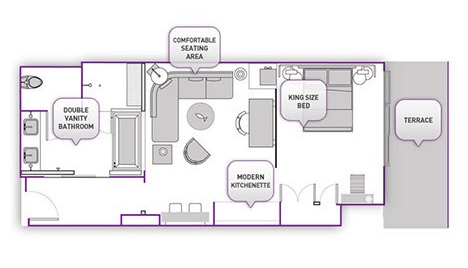 What Guests Say about the The Terrace Studio

Cosmopolitan’s fan reviewer CennPennTraveler, giving a tour of the Terrace Studio says that he is absolutely in love with the room, the amazing bathroom and the huge bathtub that ‘makes bubbles’. The spacious shower cabinet and the luxurious toilet with cool wall paper and a nice vanity area with two sinks really impressed him.

What he really likes about the hotel are the coolest little quirks including the table books, and in addition there is an awesome L-shaped couch and a 52 inch plasma TV in the living room. The kitchenette has a mini-fridge which has been filled with many expensive items, a microwave, a dishwasher and a kitchen sink. The bedroom has a kingsize bed, a closet with a safe, a great bathrobe, slippers, iron, shoes and a laundry bag. In the corner area of the bedroom is a desk area with another television.

What Cenn describes as the best part of the studio is the terrace with a chair to recline and experience the bewitching panoramic view of the Strip. He seemed to be completely mesmerized by the the private terrace overlooking the Strip, and the awesome Bellagio Fountains with the Musical Water Show playing to great music. He endorses the room to be beautiful, cool and awesome!

Reviewers rave that if you are looking for a deluxe hospitality experience this is the room for you. With a king size bed and the breathtaking view of the bellagio fountains, the Terrace Studio is definitely a room with a wow factor. To read more reviews click here.

Your feedback is important to us so we can continue providing you with travel information that meets your needs. Let us know if you have found the travel details you were looking for by rating your satisfaction with our page, or help us improve by leaving a comment below.

City Studio at The Cosmopolitan

Terrace One Bedroom at The Cosmopolitan